AustArch: A Database of 14C and Luminescence Ages from Archaeological Sites in Australia 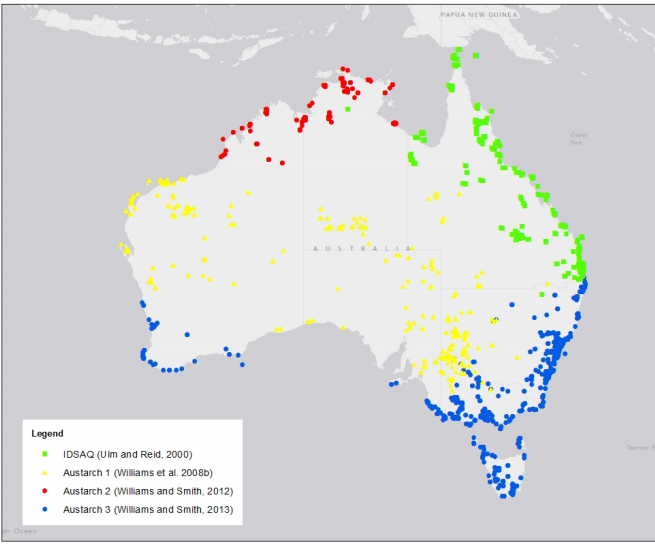 AustArch: a radiocarbon database for Australia The AustArch dataset consists of 5,044 radiocarbon determinations from 1,748 archaeological sites across Australia. The dataset...

AustArch: A Database of 14C and Luminescence Ages from Archaeological Sites in Australia

The dataset was compiled and published sequentially by region starting initially with Queensland (Ulm and Reid 2000), the arid zone (Williams et al. 2008), the top end (Williams and Smith, 2012) and, finally, the southern latitudes and Tasmania (Williams and Smith, 2013). The dataset includes all radiocarbon and non-radiocarbon ages associated with archaeological deposits published in the last 60 years of research. The dataset also includes extensive, but not comprehensive, unpublished/grey literature data mainly from New South Wales and Queensland. Some unpublished/grey literature from Victoria and Western Australia is also included through personal communication and/or other databases but no comprehensive review of archaeological repositories containing such information was undertaken in these states and territories.

Overall, information has been obtained from 1,067 publications in the development of the dataset, with several hundred more being examined but failing to contain pertinent data. Of these publications, 583 (55%) were journal articles; 51 (5%) were books; 159 (15%) were book chapters; 100 (9%) were unpublished undergraduate or PhD theses; 164 (15%) were unpublished consulting/commercial reports; and 10 (1%) came from other sources.